An e-Learning Challenge – Why Should You Care Right Now?

We are delighted to have Julie Dirksen as a blogger this week. Julie worked with Allen Interactions for nearly a decade as an instructional designer and currently is a design consultant for Allen Interactions in addition to her other clients ranging from Fortune 500 companies, to innovative technology startups, and major grant-funded research initiatives. Julie has more than 15 years of experience creating highly interactive e-learning experiences, is an avid blogger, author of Design for How People Learn, and a facilitator for ASTD's Advanced e-Learning Instructional Design Certificate Program.

Okay, you’ve just found out that while you were at the dentist getting a crown repaired, you got assigned the update to the let-me-tell-you-what-the-32-pages-of-legal-mumbo-jumbo-say safety e-learning course that every employee has to take annually. This the most tedious and hated e-learning course your department has, but it’s legally required. Your co-workers (usually very nice people) have shamelessly thrown you to the wolves in your absence. How can you make this less painful for all involved, and actually use it to improve workplace safety?

There are a lot of answers to that question, but let’s talk specifically about challenges. Challenge is one of the parts of Allen Interactions’ CCAF-based Design Model (Context, Challenge, Activity and Feedback), and I think that creating good challenges are a critical skill for instructional designers. 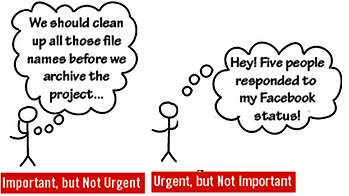 We are inclined to pay attention to urgent things, because we evolved in an environment where “urgent” was frequently equivalent to “things you need for survival” or “things that can kill you.” Stephen Covey’s classic 2x2 matrix of urgent vs. important tasks highlights the fact that we frequently attend to the urgent rather than the important. Of course, we deal first with things that are both urgent AND important, but after that, we tend to deal with the urgent (the email that just popped into the box) ahead of the important (the report due at the end of the week). Image Source: Design For How People Learn by Julie Dirksen.

Behavioral economists study the concept of hyperbolic discounting, which is our tendency to prefer rewards that come sooner over rewards that happen later, even when the later reward is somewhat larger.

Think about your answer to the following questions:

Basically, if the reward is big enough, we are willing to wait for it, but if it’s not very big, we aren’t as interested.

If you think of this in learning terms, you have a similar transaction with your learners. You are asking them to pay attention to the lesson, and the reward for learning is getting to use what they’ve learned.

Research into willpower and cognitive effort suggests that people can only force themselves to pay attention for a limited time period, after which they struggle to stay engaged. If you’ve ever read tax regulations, you know what I’m talking about.

But we don’t feel anything like that level of effort to pay attention when we are watching a really good, plot-driven movie, right? So what might be different?

In learning environments, we tend to focus on future consequences and outcomes, but we know that we are drawn to rewards that are immediate. Things that are going to happen in the future, regardless of how dire they are, are less compelling than things that are happening RIGHT NOW.

Basically, if I’m asking somebody to pay attention to material they aren’t going to do anything with for a long time, it’s similar to asking people to wait a year for $11—it’s just not that compelling.

But if it feels like something that’s happening right now, then $11 may be all the reward you need.

An example I sometimes talk about is The Most Boring Training I Ever Had, which was a course on Health Savings Account procedures. It was so tedious, I pretty much wanted to stab myself in the eye with a pen to escape.

If you think about it, it’s a classic delayed reward problem. If you pay attention to the lecture about what you can pay for using your HSA, you will eventually get the reward of getting to use that information approximately 11½ months later when you are trying to figure out if you can apply it to your kid’s eyeglasses, or if you can use it to cover those massage visits for your sore neck.

Pay attention now, but don’t get the benefit until later.

But, if we use a good challenge, we can make something that happens later feel like it’s happening now. For example, if instead of lecturing people about their HSA reimbursements, you said “Okay―here are the guidelines and three characters with different health ailments. Figure out if they can use HSA funds to cover them―go!”

For a lot of learners, that will feel a lot more urgent. To me, it feels like I get to use this information right now, rather than discounting the value of it because I have to wait. Well-designed challenges create the sense of urgency―that sense that it’s happening now.

That’s why “You may need to know these safety evacuation procedures” is far less compelling than “A fire just broke out on the 8th floor! Quick―what do you need to do first?"