I presented a session last week at the eLearning Guild Learning Solutions Conference in Orlando.  My session, Creating Value in e-Learning Design through Effective Instructional Feedback, was focused on issues related to crafting useful feedback structures within instructional interactivity.  In preparing for the talk, I was looking through a bunch of learning examples and was struck by the huge variation in scope of feedback across a number of instructional applications, all of which I thought were good.  In one case, the feedback was little more than a confirmation that a response had been made; in another example, the feedback involved an extended sequence of screens and follow-up questions and multiple levels of judgment.  But both, in their own way, seemed exactly right.  It got me thinking about how this was possible? Why don't learners feel either gypped in the first instance, or burdened by the second?

For me, the answer lies in the realization that effective instructional interactions take on many characteristics of a good conversation.  The lesson must provide some prompt or information that elicits a response from the learner.  The learner might "reply" in any number of ways, but in any case the lesson needs to continue the dialog by returning with some sort of follow-up response.  As long as the complexity of the contributions of each party seems relatively matched, it's a satisfying interchange.  It's when a conversation gets seriously out of ba 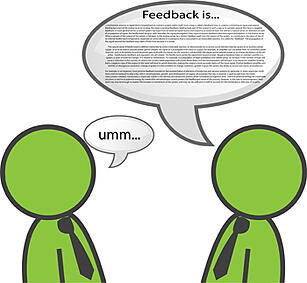 lance that one begins to feel burdened by it.  For example, there's little worse than being asked a question, working diligently over some time to come up with a response, delivering the response, and then have only "OK, press Continue" as an acknowledgement of one's effort.  Or similarly, being  asked a simplistic question that requires little thought to answer and then being drowned in more and more content. Those are the kinds of interactions we cease to invest anything in.

Perhaps this is too obvious of an observation, but in the last week, this thought has continued to percolate in my mind, and it seems important.  There have been times during the early prototyping stages of design when, even though the content was correct and the interactivity seemed sound, I've still felt like an interaction was going to fail, even though I couldn't exactly explain why.  And in some cases, it was doubly puzzling because we were adapting parts of an existing design that we knew worked well in another context.  I recognize now that part of the problem was probably this lack of balance; that the feedback didn't coordinate in complexity or simplicity with the level of effort exerted by the learner.  Anyway, I'm still pondering what role this might have in design of engaging interactions.

Creating e-Learning that Makes a Difference
e-Learning Media Design: To Narrate, or Not to Narrate – That is the Question