What is selective fidelity?

Selective fidelity allows for customization to the level of fidelity needed. Using selective fidelity (instead of exclusive high fidelity) allows for much more accessibility when it comes to creating immersive learning experiences. We can create conditions for learning that are much less expensive and time-consuming just by focusing on what is most important. Where fidelity is focused will depend on the learning outcomes.

Increased access to creating immersive learning means we can create more training for situations that aren’t readily available in real-world conditions, like life-threatening emergencies. A teenager can easily learn to drive in a driving simulator or in the real world, but it’s a much different scenario to prepare a law enforcement officer for a high-speed chase. It would be highly costly and improbable to set up this kind of training in the real world.

So, in all of these scenarios, deciding on the levels of fidelity required for effective learning outcomes is the first step. This should be driven by the behavioral fidelity (sensory, psychomotor, and cognitive) needed to practice the required skills, and not the appeal that nice-looking graphics have. 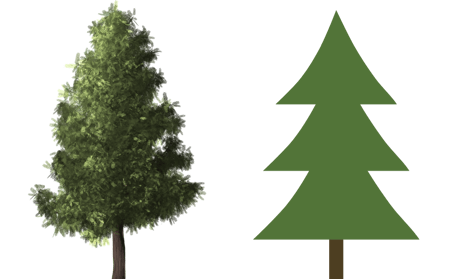 There is a massive difference in fidelity between these two images. The pine tree on the left isn’t perfectly symmetrical. You can see details on the bark, branches, and even the individual needles. The image on the right is a simplistic representation of a tree. It could be a pine tree, a spruce tree, or something else altogether. In this case, it doesn’t matter what kind of tree it is.

When would you need a high-fidelity representation of a tree? If you’re learning to identify different pine trees, you would need to see all of the little details. If you are creating an immersive environment for a helicopter simulation, you would need trees next to the landing strip to queue the pilot on altitudes during landing. In this situation, you wouldn’t need to see the pine needles. You would only need to make sure the low-fidelity trees had a good representation of their height relative to other objects.

Remember, behavioral fidelity is the fidelity of what people actually do in the learning environment.

Correspondence of the visual, auditory, and other sensory inputs created in the learning system with those encountered in the real-world conditions of interest (i.e. the live environment)

Correspondence between the responses generated by the human in the learning system versus the live environment. (What they do with their muscles i.e. gross or fine motor control, speech output, etc.)

Learning to recognize objects in any scenario creates the need for high sensory fidelity. In the military, certain positions require training for the recognition of different types of aircraft. These individuals are trained to recognize aircraft from their silhouettes and from different angles. For nature lovers, there is training to identify different plants by their foliage or to recognize the type of bird by their call. In these scenarios, sensory fidelity is highly important, while the other two aren’t nearly as important.

In an immersive environment designed to train a technician to troubleshoot in electronics maintenance, both the sensory and cognitive fidelities need to be a priority. The technician needs to be thinking through the correct steps to take at the right time, in the right order, based on the sensory inputs they are experiencing. Psychomotor fidelity is much less important in this scenario, though it still exists.

In these scenarios, what the muscles are doing matters the most. In immersive rifle marksmanship training, the trainee must learn to hold the gun correctly, align it accurately, use the sight, breathe properly, and squeeze the trigger correctly. It doesn’t matter if they are shooting at a high-fidelity representation of a target or a low-fidelity one. It doesn’t matter what they are thinking about. Their muscle movements and motor control are the most important.

In this situation, where someone is practicing self-defensive actions in an immersive environment, both sensory and psychomotor fidelities are important. What their muscles are doing is important, but so are the sensory interpretations of the situation that require specific movements as a response.

In another scenario that requires high sensory and psychomotor fidelities, a person is practicing precision. An immersive training program demonstrating the ability to thread a needle properly will require sensory fidelity to see very specific things correctly. It will also require precise hand movements, but the cognitive fidelity doesn’t matter.

There are some interesting cases where neither the psychomotor nor sensory fidelities are important. When learning to play chess in an immersive environment, there wouldn’t be value in a high-fidelity representation of chess pieces. Simple chess pieces would not impact learning in a negative way. What matters most in this learning scenario is how the opponent behaves. The opponent must play at the right cognitive level to allow for learning of openings, progressions, and endings.

In a few cases, all three fidelities are important. During a CPR training simulation, it’s important to pay attention to the correct things at the right times. It’s also important to read signs from the person receiving CPR, take corrective actions in the right way, and think through all of the decisions as you go through the process. In this case, the sensory, psychomotor, and cognitive fidelities must be correct.

Are you asking, “How do I figure out the level of fidelity I actually need?” Your answer will depend on a few things. First, you need to identify the goals of your immersive learning program. Next, you will complete a task analysis based on the job you are providing training for. Some jobs have a task list already completed and others will require a comprehensive job task analysis upfront. You’ve got to get down into the details to do this. You want your training to be maximally effective, so don’t just make these things up. 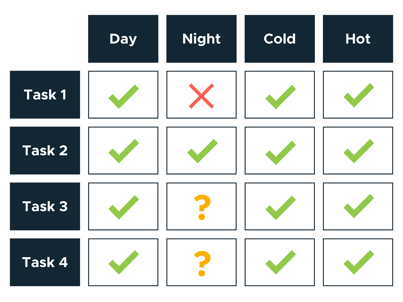 To characterize the behavioral fidelity requirements for each task, create a Task X Condition matrix. To do this, compile a list of the objects that should be represented in the immersive environment.

Once you’ve compiled a list, assess the behavioral fidelity of the sensory dimension required for each combination of the Task x Performance outcome. Use a binary (high vs. low) or trinary (high vs low vs medium or unknown) scheme to rate fidelity requirements.

Putting it all together

Immersive learning and training systems are carving out the space where education, training, and learning intersect with technology. As opposed to traditional learning, immersive learning experiences are as close as you can get to real-world experience. With benefits such as lowering the cost of training, reducing trainee risks, saving resources, and creating more accessibility, this seems to be the way we will train in the future.

Using selective fidelity is our recommended approach to determining the best attributes of an immersive learning system. It allows for much more accessibility, as we can create conditions for learning that are less expensive and time-consuming just by focusing on what is most important. Our methods emphasize understanding the behavioral fidelity requirements of effective learning (sensory, psychomotor, and cognitive) and apply to all extended reality systems (VR, AR, and MR).

*Thank you to Dr. Dennis Folds for contributing to the content in this blog. 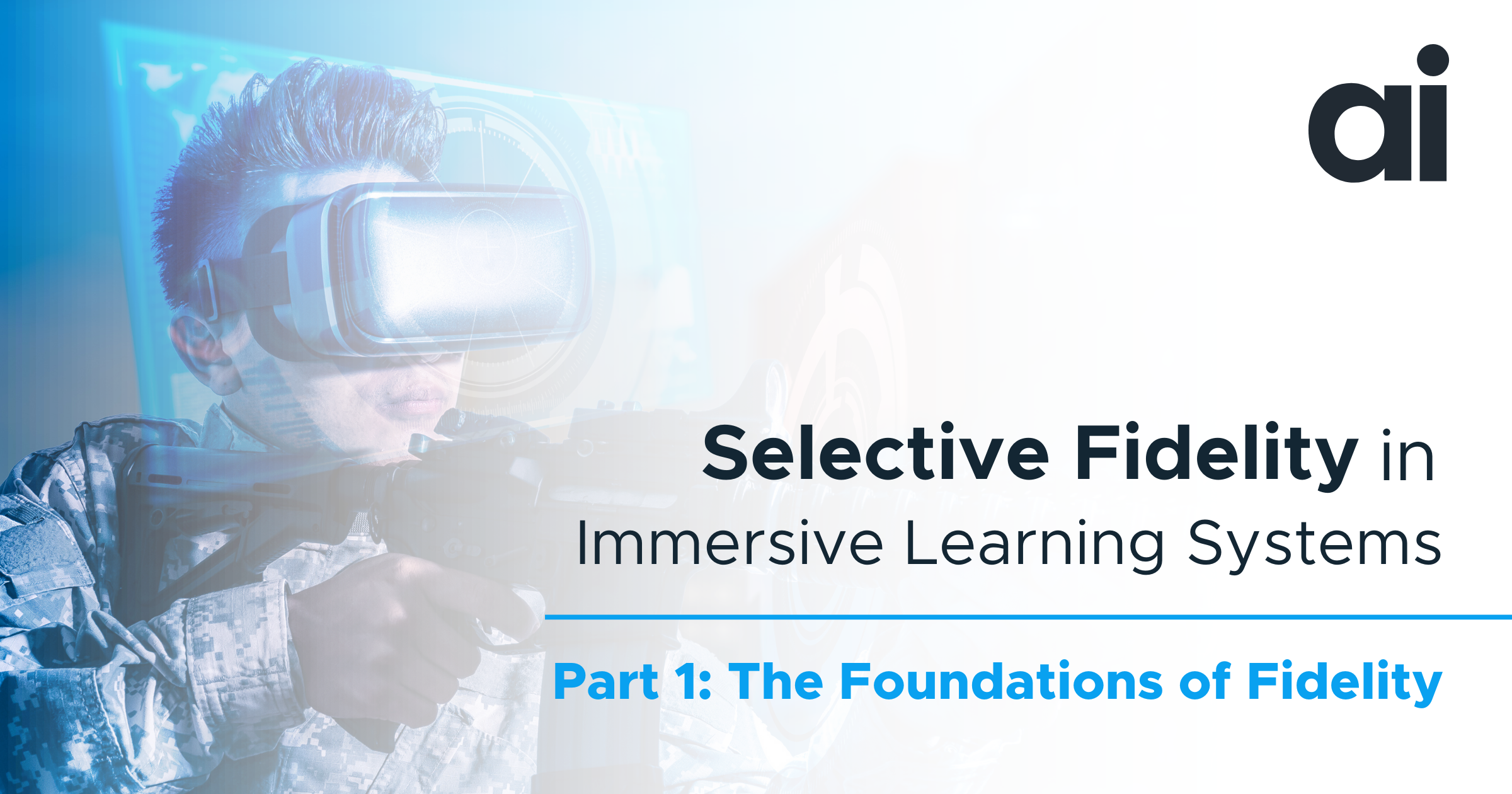 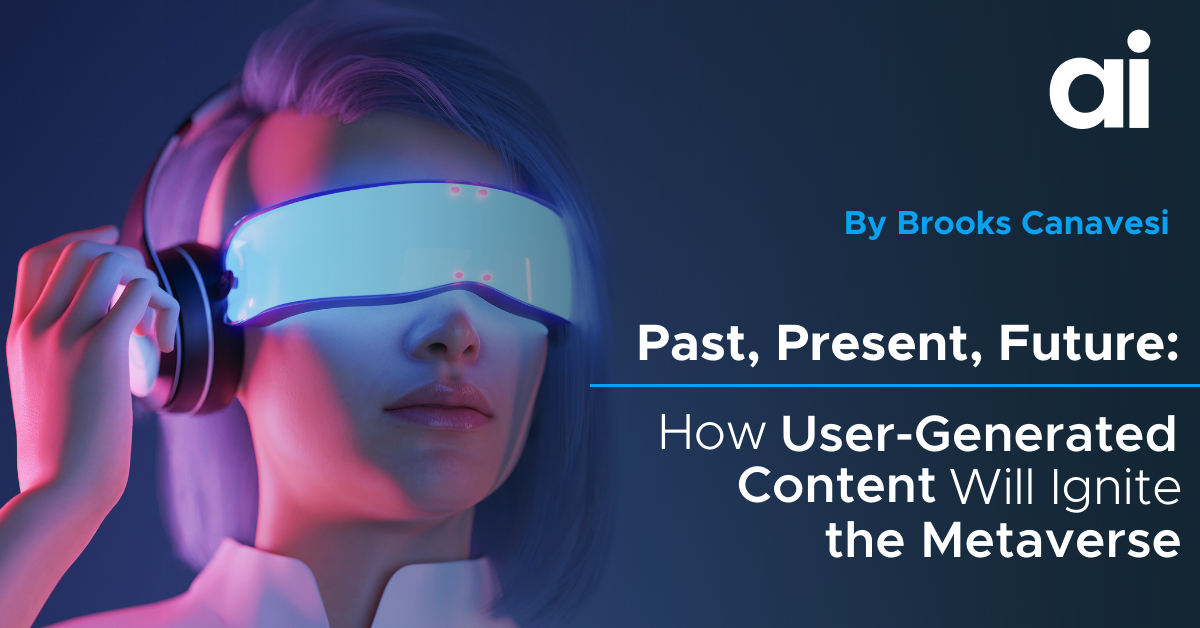 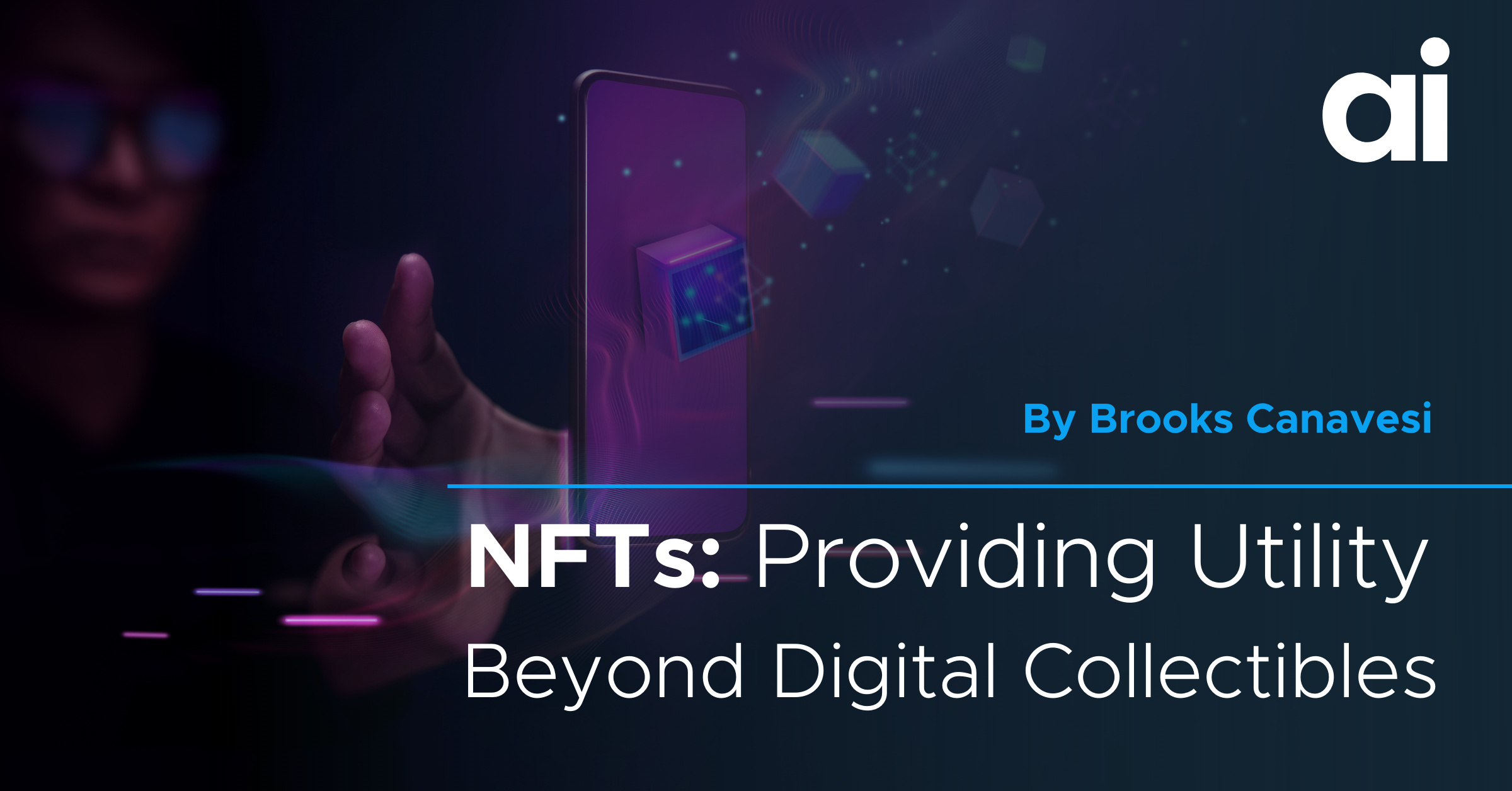